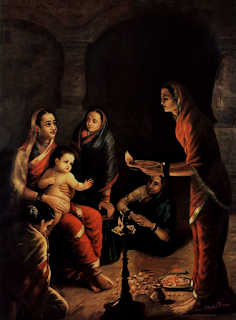 To start with, a Samkalpa should be performed. This is a swearing for the child's long life and removal of any shortcomings passed on from the seed and the womb. Shaastras dictate that this is to be done on the twelfth day of the baby's fourth month. An oil bath is indicated for the child and its parents. After the baby is bathed and adorned with new clothes, the mother, facing North, hands over the baby to her husband and stands behind him. Next, Sun God is invoked while chanting appropriate mantras (hymns) and showing it to the baby. This procedure is performed by some in the third month. The child is made to view Agni (Fire God) and Chandra (Moon), followed by cow viewing, all in the fourth month.

The blessings of all the Gods are invoked, to take care of the well-being of the child. It is a common practice to visit a temple for the Darshan (viewing) of all the deities. In an appropriate place surfaced with cow dung, a square boundary is marked and covered with cereals; baby is placed on it, with the chanting of mantras for the child's protection. Elders as well as married women are invited to bless the child and in return honoured by extending them good hospitality as well as charities.

As per the insight of Maharshis the Jeeva which was once upon a time playing on the lap of the Supreme Lord, descended to His creation, as per His wish. In this descent, a veil of twenty-four Tattvas engulfs the Jeeva. The Tattvas-bound progression brings with it, the Devatas (deities) governing them. A Jeeva desiring freedom from bondage must preserve the Devata shakti (power of the deities) through Sadhana (meditation) and appease them too. While looking inwards through meditation, a vision of God is obtained within a framework surrounded by Surya-Chandra-Agni-Mandalas (provinces). This experience of inner vision is explained in Yoga shaastra.

Sriranga Mahaaguru had emphasised this aspect too. The primary Effulgent Light manifests itself in the Surya-Chandra-Agni-Mandalas. We may recall the practice of lighting a triangle-shaped lamp in front of the just born baby, while performing the Jaatakarma samskara. The Devatas in these Mandalas provide all that is auspicious and help the baby attain Yogic Union, by getting over its divine 'loss of memory'. Viewing the external Sun, Moon etc. which reflect the inner vision, at an appropriate time when the baby's mind is tender and unpolluted, turns the its mind inwards. It helps the Jeeva to become one with the Supreme Lord by uncovering the Tattvas of the human body (Aavarana). It gives liberation (Niraavarana) from the human body which is bound by Tattvas. Salutations to the great ingenuity of Maharshis! "Namah Paramarshibhyah, Namah Paramarshibhyah."