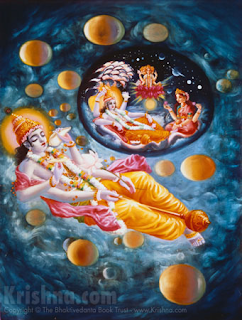 Dharma begets Matter. Happiness arises from Dharma. Everything is obtained from Dharma. This world is the essence of Dharma.

Dharma assumed so such prominence, as it was considered to be the essence of the world. The word 'Dharma' is derived from the Sanskrit Dhatu 'Dhring-Dharana-Poshanayoh". That which sustains and nourishes everything is termed as Dharma.  As this world is nurtured and sustained through Dharma, everything is ascribed to Dharma. That is why Sri Sriranga mahaguru specifically bestowed the original meaning for the word Dharma, as the Lord Himself. Only when we understand the real meaning of Dharma, we will be able to comprehend all other related issues.

This world created by God is sustained only by Him. In view of this, if we regard Him as the Guardian, that would only add to the embellishment of His Role. The meaning for the word ARTHA should be considered in this context as Matter. In this context, it could be understood that "this world of matter is created by God", is the meaning conveyed by the phrase "Dharma begets Matter". Further if we progress with the realization, that God is everything, we get to know the purpose of life. In this background, Dharma gets additional meanings like good conduct, means of obtaining communion with God etc. Only when we ascribe God as the meaning to the word Dharma, the above shloka is understood clearly.

The sublime message concealed in the wise utterance enumerated above, reveals itself as below:

"Matter evolves from God. Happiness arises from God. Everything is obtained from God. This world is the essence of God."