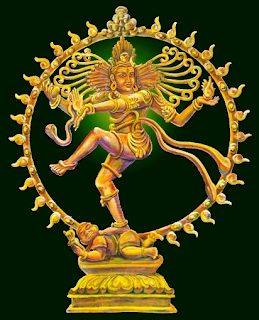 Once some sages had planned a Yajna (sacrifice) in a place called Daarukavana. They had forgotten that the primary purpose of performing Yajnas was to attain God. They had begun to believe that performing acts of karma was in itself Dharma. Acts were performed only for the sake of performing them, was their thought process, just the way we think of karmas now.  Bhagavan Mahaadeva felt that these sages needed to be taught a lesson and be enlightened.  So he took the form of a youth and came to DaarukaVana. The pure hearted wives' of the sages were mesmerized by the handsome youth, forgot themselves and stood around Him.  Though they did not know that he was Lord Shiva himself, his very presence had made them loose themselves.
The sages were angry when they witnessed that the wives who had come to help them in the Yajna, were standing around the youth. In their anger, using the power attained by penance, they created many ferocious animals and directed them against the boy. But all was in vain.   He killed them all and used them to decorate himself; serpents as his anklets and armlets, the skin of the tiger to wrap himself around, and so on.  Now in fury, they created a fearful demon called Apasmaara and sent him to fight against the boy.  What a wonder! The boy vanquished the Demon, stood with his right foot on the demon's back and began to dance.  To their wonder, the demon had tilted his head up and was watching the face of Nataraaja mesmerized and delighted by the sight of the Lord.
Perplexed, the sages understood their blunder.  The moment they realized that Lord Para Shiva, had himself come in the form of Nataraaja, they remembered their life's mission and their true identity and were also lost in His dance.

In the eyes of the great Shri Sriranga Mahaguru, this is a story full of spiritual tenets – tatvaas. All ordained actions, karmas, are performed to attain the knowledge of the supreme – Jnaana. The experience of God is Jnaana.  Performing actions routinely without this goal is in vain. God, as Nataraaja had descended to remind the sages of this principle. But their ego had prevented them from recognizing Him.  However, the wives, with pure and sublime hearts, were naturally attracted to Him. No Aasuric or demonic power can work in front of that great power; hence they were all vanquished.  As said earlier, the name of the demon was "Apasmaara", meaning the "the one who has lost the memory".  All those who have forgotten the effulgent light, have Apasmaara, the disease of forgetfulness, amnesia. The region in our spinal cord, between the base of the spine and near the throat, from the mooladhaara to vishuddhi chakra, is the field of action of nature, Prakruti, the region which makes one forget one's own True self. When this nature, Prakruti, is suppressed by Lord Nataraaja, the true self, remembered, reveals itself.  That is why, having regained the memory of his true identity, Apasmaara was watching the face of Nataraaja with delight.

This is the story of us all. We have forgotten our true effulgent selves, like that demon. Just like the sages at Daarukavana, we perform our actions -karmas, unremarkably, without any purpose or life in them.  Let us pray to Lord Nataraaja, the personification of kindness and grace, to rid us of our amnesia, the memory loss and make us remember Him.

Note: The Kannada version of this article can be viewed at  AYVM blogs.