The Kitchen and the Hearth 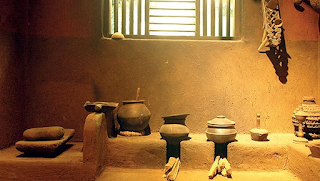 For a machine to perform its intended function, nuts and bolts, even if they are small, must be perfect. If all the parts of a machine are flawless, then only the machine will be in proper condition. In the same way, the seers (rishis) have designed the art of cooking comprehensively without neglecting any of its aspects.

We can understand their vision by just examining their thinking about where the kitchen has to be located. The kitchen must be adjacent to the Sanctum –Sanctorum in the house, the pooja room. As soon as the food is prepared, should it not be offered to the deity first? Therefore, the preparation must reach the pooja room first but not the dining place.  Only after the food gets transformed into "sacred food" (prasadam) by offering it to the deity, should it reach the dining room.

Further, there is a rule that the hearth must in the south-east corner of the kitchen. Cooking can be done without any problem even if the hearth is placed in any corner, but south-east corner is the location of the god-head of fire (Agni) and his natural flow.  People who are aware of and conversant with the secret forces of nature can only plan this way. With this background, the hearth must be located in the south-east corner of the kitchen. This way, there will be natural flow of the grace of the lord of fire, Agni.  If we see the fire in physical form too, there won't be any impediment to our thought flow towards Agni, the lord of fire. This also bespeaks of the skill of making the mind flow from the gross to the subtle.

One can also witness the expertise of the sages, in the way the hearth is designed. These types of hearths are a rarity now-a-days. There are three mounds in the hearth one at the back and two in the front. The three mounds appear like a triangle.  The practice of making a hearth with three large stones, one at the back and other two in the front, for large scale cooking, is prevalent even today.  The ease of placing vessels and cooking with this type of arrangement is a mundane benefit, but its deeper significance has been explained by Shri Sri Ranga Mahaguru thus:

The energy at the origin of creation is termed as Bindu, the dot.  That is the form of the Supreme Lord.  In order to evolve, it further divides itself into two besides the original Dot, as Himself and Nature (Prakruti).  When we see these three mounds, they remind us of the Lord at the root of creation and His evolution.  So, this ingenuity in the design of the hearth, pregnant with spiritual meaning, such that the soul does not forget from where it originated, is indeed astonishing.