The Significance of Silent Exposition 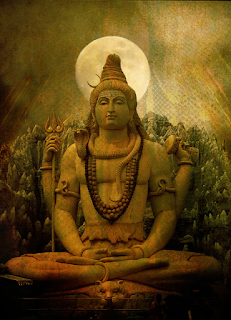 The scenario under the Banyan tree is a puzzling one. Disciples are seated around a Guru. The disciples are all aged.  Guru is still a youth. He is explaining silently.  But all the doubts of the disciples have been shredded. This is the essential meaning of Shri Shankara Bhagavatpaada's Dakshinaa Murthy Strotram.
Generally, Gurus are old and the disciples are young. But here it is the opposite. Furthermore, how can silence and explanation go together? Either one should be silent or explain with reasoning and examples. And the next is more bizarre. By explaining in silence, it is to be believed that all the doubts have been shredded.  In the world there are innumerable instances where people do not understand in-spite of explaining many times and expounding in many different lucid ways. But here, he is not speaking at all. So how did the doubts get cleared? Are all these things not puzzling?
Shri SriRanga Mahaguru has given the following explanation. The banyan tree that is alluded to here is nothing but the great tree of the universe. In its base (moola) is seated the seed of the universe Lord Dakshinaa Murthy, Parama Shiva, the supremely auspicious Lord. He is beyond time and the One who controls time. Hence the effect of time and aging does not affect Him. He is forever young. Disciples, in search of the ultimate truth, are subject to the vagaries of time and it has taken a toll on them. They have aged. When they had doubts about the ultimate truth, they have seen the personification of the eternal truth – Parama Shiva seated in front.  He is sitting at the pinnacle of the ultimate truth. The moment they have perceived Him, their instruments of observation have also followed Him to that pinnacle. In the light thrown by that effulgent truth, all the life's doubts have been clarified. The scope of the medium of speech is very limited. The silence of Lord Dakshinaa Murthy has unfolded all internal truths. When they were able to visualize the root of creation and its elaboration in their inner eye, they have no doubts left.  Let us pray to Lord Dakshinaa Murthy to rid us off of all our internal darkness and bestow upon us the glory of inner light.
Note: The Kannada version of this article can be viewed at AYVM blogs.