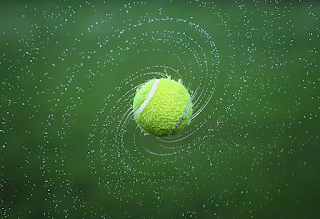 A Virtuous person is like a ball that rebounds immediately on falling to the ground, whereas a Wicked person resembles a lump of mud that is unable to lift itself, when dropped on the ground.

Here two types of individuals are portrayed - Arya (Vituous Person) and Anaarya (Wicked Person). The former discharges his duties, whereas the latter shirks the same. One who performs the tasks pertinent to him is Aarya. The person whose nature is just the opposite is Anaarya. It is but natural for everyone born in this material world, to face difficulties. This cannot be avoided even by a Seer. In this context, what could be the scenario for an ordinary mortal?! Even a person who leads an austere life with right word, thought and deed gets completely vanquished in the avalanche of insurmountable series of miseries befalling him, losing all hope of revival. However with the passage of time he is able to rebound to his original state of mind, to experience happiness.

A ball is able to rebound even after falling to the ground. As the ball is light, it escapes the force of Gravity and gets lifted up immediately on being dropped to the ground.  Similarly a virtuous person gets back to his state of eminence without yielding to any sort of desire, attraction etc. in the environment to which he is eventually placed.

In comparison, a lump of mud cannot lift itself up against gravity, due its inherent weight, once it is cast on the ground. Similarly a Wicked person, once entangled in misery during his lifetime, cannot get liberated from the same.

In contrast, a Virtuous person washes off all his sins with his good deeds, gets lighter and ascends to the elevated state. A Wicked person becomes a sinner as a result of his evil deeds, becomes heavier, gets dumped here itself and suffers intensely.