The Power of enticement of the Blended Senses 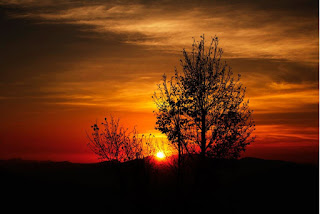 Jaimini, the disciple of Sage Vedavyaasa was diligently noting down what was being dictated by  the profoundly wise sage.  Knowing how difficult it was to control the senses, Vedavyaasa was dictating "Balavaan Indriya-graamo vidvaamsamapi karshati" meaning "the senses in combination are so powerful that they attract even the learned". Arguing within himself that "it may be true that the senses may attract commoners and make them weak but can't cause downfall to the learned and especially the trained" Jaimini changed what was being dictated to    "…. Naapakarshati" ie., from "they attract even the learned" to "they can't entice the learned".  Vedavyaasa, even though aware of this change, kept quiet.

One day there was a huge downpour. A soothingly calm atmosphere prevailed. Sage Jaimini was seated serenely in his hermitage after completing his prayers to the setting sun. The god of fire was burning in all his glory in the sacrificial hearth.  The representative of the eternal effulgent light, the flame of a wick, was   glowing brightly at the crest of a lamp post. At that very time he heard the wails of a woman in distress. There stood at the door a beautiful woman fully drenched. She requested the sage whether she could get protection in the hermitage till the rain abated.   Moved by her plight, the sage immediately acceded to her request. He made her sit in front of the fiery hearth. As he was watching the beautiful damsel, the sage's mind  slowly but surely slipped, disturbed. Soon, he suggested  to her whether she could be his wife. She responded by saying that if he should carry her  and go  round the  fiery hearth thrice,  she was agreeable. While he was performing as was told, during the third circumambulation the lady asked "naapakarshati?!" , "cannot attract the learned?". What a surprise! Instead of that beautiful damsel, the one who was in Jaimini's arms was none other than his Guru, Sage Vedavyaasa. Vedavyaasa had performed a clever experiment to drive home a subtle understanding!
Control of the senses is not attained easily.   It has to be acquired by the grace and guidance of the Guru and by constant and consistent practice of the path shown. "Life prevails only if the soul exists.  Only if the soul prevails over the senses as per its need, then only life exists" so the great ShriRanga Mahaguru used to remind.