Gain by Serving the Guru 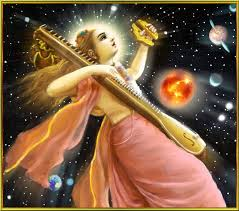 Sage Sri Naarada shiromani was famous for devotion to God and is considered to be the Master for Bhakti Shaastra. We find details of his previous birth in Srimad Bhaagavatam.  He is born to a servant maid working in ashram of sages.  Even at the age of five, he was not interested in playing, but was deeply interested in Vedas, Vedic literature and very much engrossed in devotion to Lord. Once some saints were residing for some time in the same ashram during Chaturmasya (Four months of 'non-mobility'-austerity). Naarada was appointed to help them. He developed a fascination and respect towards those saints, looking at their intense devotion to the Lord. The way those saints performed Bhajans and prayed to God with devotional songs impressed him so much that he became much more dedicated and started living their way. He could wash off the sins of his previous births by serving them well. After four months, the saints moved out from there. But Naarada continued the teachings of sadhus implicitly. Unfortunately he lost his mother due to snake poison. But he never lost his heart. He was still courageous and took the event as the decision of fate. He thought of it as an opportunity to release himself from the bondage of the family. With realized mind, he started moving as per the directives of the Master. He entered a deep forest and took to penance there and after a long time, visualized Sri Hari in his dhyanam (Meditation).

Sriranga Mahaaguru was stressing always that implicit faith and devotion in the Guru (Master) is essential for anyone who pursues the path of meditation. Everyone requires the guidance of Guru. The fruition and duration of penance for any person depends on the intensity of his faith in his Guru. Though the time Sri Naarada spent with saints was very less, still he followed the teachings of the Master throughout his life. He pursued his penance in spite of plenty of obstacles coming in the way. The famous song "Guruvina gulaamanaaguva tanaka doreyadanna mukuti" of Sri Purandaradaasa clearly emphasizes the state of our mind. Here, becoming a servant to Guru does not imply   exploitation. It helps to control the sense organs and to have a well-stabilized mind which leads to success in one's life. Let us hope, everyone achieves such a sweet and happy state   of mind by serving one's   Guru.