The Significance of the Sound of the Sacred Bell 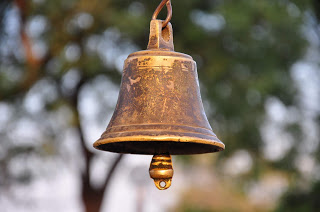 Uddhava was ShriKrishna's close relative, a friend and his devotee. He came to know that the time had arrived for Lord Shri Krishna to leave this world and return to His abode.  Then Uddhava prays to Lord Krishna saying "Oh! The lotus eyed! How should one, who is aiming to attain liberation, meditate upon You and on which form of Yours?   Kindly instruct me on the subject of meditation".  In addition to other details, Krishna bestows a unique wisdom "The sound of Prananva, OM, reverberating in the heart is akin to the long cadence of the rumble of the Sacred Bell. The intense   absorption in that sound makes a practitioner (Saadhaka) traverse from Moolaadhaara Chakra to Sahasraara". If we were to observe His remark closely, it is clear that the effect of the sound generated by a Bell, constructed as defined in shaastras, replicates the Pranava generated in the heart.  Hence it is clear how greatly beneficial is the sound generated by Ghanta.

One can also examine the information on Ghanta in Dhyana Bindopanishad "A yogi, seated in Siddhasana and donning Vaishnavi mudra (posture), internally hears many a sacred sound in his right ear. One of the sounds he hears is like the resplendent resonating sound of a Ghanta. The mountain of sins committed, which could not be destroyed in any other way, would be cut to pieces by meditating on this Naada.  Because of the effect of this sacred Naada, the imprinted volitions of the mind, Vasanaas, decay and he will be able to reach the Lord".

There is a saying that the one who knows the culminating tip of Pranava is a Vedajna, (knower of Vedas). The cadence of the very tip of Pranava is like the unbroken flow of oil when it is poured continuously. It is like the resonating flow of sound from Ghanta.  If we observe these things, it is clear that the sacred bell is not ordinary. It is a means for propelling one towards the Lord.  In the treatise on music called Sangeetha Ratnaakara, Ghanta is called Ghana-Vaadya, an idiophone. There is a statement which says that Ghanta encompasses all other instruments – "Sarva Vaadya Mayi Ghanta"

Shri SriRanga Mahaaguru has instructed his close disciples in many important aspects about constructing a Ghanta.  It was the instrument that was most revered by him. He used to recite many secrets about ghanta that were revealed to him in the secret depths of his heart. He also used to perform many demonstrations.  "The musical instruments of India have emerged from the Lord and take one back to Him" he used to say. The sound of Pranava is called "Anaahata Naada" meaning sound generated without striking, sound internally generated. The construction of the sacred Bell must be such that it resonates in a such a way that it brings out the naada similar to the Pranava heard in the Anaahata Chakra.

This is the reason why the Ghanta is used in India during worshipping and while performing auspicious ceremonies. Let us cherish the sound of Ghanta which replicates the sound of Pranava within us in the solemn way that our sages used to revere.