A Message to Humans from the King of the Jungle 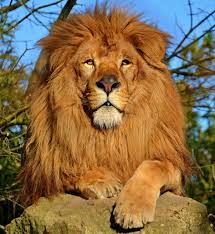 The lion is the king of the jungle. No one needs to anoint it to be the monarch. “King of Animals” is its title. It is blessed to be royal by birth. We observe an unusual behaviour in lions. While they travel, they have the habit of stopping after some distance, turning back and surveying the road traversed thus far. They do this till they reach their destination. This is called “Simhaavalokana” - the “Lion’s survey”. Many people do this too. They call it introspection or review. This can be a daily affair, or at intervals as appropriate. They review their achievements against their own goals and make new plans. Generally, these are for the matters of the world. They call this itself as Simhaavalokana.

The Sanskrit word ‘maanava’ for humans is derived from two words ‘mana – avabodhane’ meaning ‘one with an overarching vision’. The life of human beings is not confined just to the physical. It encompasses two more spheres namely mental and spiritual - dealing with the heavens and the one beyond- the empire of the almighty. In Sanskrit, these spheres are called ‘Adhibaoutika, Adhidaivika and Adhyaatmika”, related to the terrestrial, celestial and spiritual domains. The human soul has the ability to traverse through all these three spheres. The joy that one can get in the other spheres is many millions more than that can be had in earthly pursuits alone. These are the words of the ones who have inner vision and quintessential view of life. That is why the great Shri Shankara Bhagavatpaada sang “my country pervades all the three worlds” – (‘ಸ್ವದೇಶೋ ಭುವನತ್ರಯಮ್’). Because our senses are used to dealing mostly with things of this world, our view is limited. We are unable to understand the subtle forces which work behind this gross sphere. Nor do we realize the effulgent power behind the subtle. The reason for this is that we have not adopted an austere life pattern. Another reason is that we make no effort to understand what is at work behind our lives. The gaze of the lion has a lesson for us.

Shri Sriranga Mahaaguru used to say the difference between incarnations and ordinary souls is this that “those who incarnate remember the purpose for their manifestation. They descend through the principles of nature (tattvas) stage by stage and remember to ascend the same way. Their descent is like climbing down a stair case. Ordinary souls plummet from higher levels as a result of their past actions”. The backward gaze of lions gives us the inspiration to look inwards and understand our Source and the principles of nature. The realized ones extend their insight right up to the Source. We have to learn this under their tutelage. We have evolved from the Almighty but have deluded ourselves as ordinary, living mundane lives; against this backdrop the lion’s backward gaze gives us a message to look inwards and remember where we came from which helps us in our voyage back to the source.