The Boon that Begets Everything 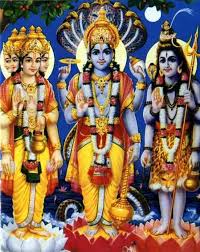 Once there was a Youth. He was blind. He was very poor and was suffering from ill health. He had no home of his own. No one was willing to give their daughter’s hand in marriage to him. In summary, he was very miserable and sad. He was praying to God for something or the other- health, wealth, eyesight, house, and so on. Once goddess Lakshmi took pity on him and graced him with some wealth. He decided to build a small house for himself. As fortune would have it, a falling beam broke his limbs. Such was his luck.

The moral of this story is that all future consequences are unknown even if God were to grant all our wishes. He then met an ascetic. The ascetic took pity on him and taught him a hymn (mantra) and asked him to chant the mantra till its presiding deity manifested. He also tutored him as to what to ask when the deity appeared. He did as he was told. When the deity revealed himself, he asked the boon as per the coaching of the ascetic – “I should see my grandson enjoy delicious food in a golden plate”.

Let us analyse the boon. To see his grandson, he should have a long life, he should get married to have a son, his son also should get married and have a son of his own, he should have sight and great wealth to see the grandson eat in a golden plate. In one boon he had asked for everything that he wanted namely eye-sight, wealth, children, grandchildren, long life and so on. .Our wants are endless. Our ability to discriminate what are necessary and what are not is poor. The possibility of asking for possessions that get us into peril is high. We do not understand the forces that work within us. We have no idea whether we are earning the displeasure of someone by asking for a specific boon.

Our past actions (karmas) follow us through many a life and give us their fruits without fail. They bind us to the cycle of life and death. We need to be extremely careful about what we desire. Jeevas are sparks which have flowered from God. They are liberated only when they return to Him and get absorbed. The purusharthas namely dharma, artha, kaama and moksha are all they need to complete their cycle and get back to Him – the right cycle, sadvrutta. Dharma, Artha and Kaama have everything in them to give all that are needed in this world and beyond. Liberation or Moksha is certain to be achieved if this path is traversed. Nature does not permit anyone to ask beyond these. Punishment is assured for any violation. “The one who is absorbed in the lotus feet of the Lord does not ask for anything. If he desires anything else, he becomes ‘avara’ - falls from being the best or favourite” so Shri SriRanga Mahaaguru would say. “Avara” means “not – the best, not the favourite”. If we ask the almighty anything that is not as per His desire, we become “non-favourites” and tumble away from his lotus feet. The wants of true devotees’ (Bhaktas) will always be as per His wish. “Let this mind of mine be unwaveringly immersed in the alluring lotus feet duo of thine” (ತ್ವತ್ಪಾದಾಂಭೋರುಹ ಯುಗಗತಾ ನಿಶ್ಚಲಾ ಭಕ್ತಿರಸ್ತು) will always be their only prayer. Is it not wise to pray just for his grace and say “kindly protect me”?