The ability to speak initiates from early days after birth. This is nature’s gift. Though
in a few cases the ability to speak is delayed, nevertheless, normally it gets course
corrected, except in unusual cases which needs medical attention and intervention.
The baby-babble is so sweet that the parents, the family, the neighbours, the acquaintances clamour to hear, enjoy and rejoice. As the child grows, it needs to develop the unique strength and power of speaking and the art of deliverance. This becomes an important identity complemented by art and science. The word ‘speak /speech’ is known in Sanskrit language as vaak. We often appreciate a well- articulated orator and often even during conversations we tend to get enthralled by a good conversationalist. This is termed in Sanskrit as Vaag-vaikhari. This leads to inquisitiveness to know, what the secret behind the wow of speech (speaking) is. Our revered sages have revealed these secrets in vedas and identified four stages in the process of deliverance of speech.

Though speaking appears simple and casual, the manifestation of speech has complex stages. This has been discovered by our revered sages and narrated in vedas.  A mantra (stanza) in Rigveda reveals that speech has four stages. The first three stages are within the body cavity. The fourth stage is the release of sound through mouth. These stages are enumerated as para, pashyanti, madhyama and vaikhari. 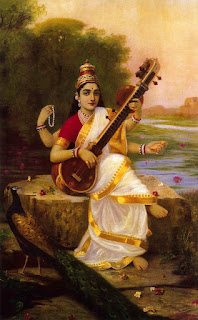 The initiation of speech is the para, the origin, in the form of power (force). When the
elated souls could focus through yogic (transcendental) stance, they could visualize uddipana, (the centre of stimulation), also known as the mulaadhaara chakra. This is situated amidst the triangle of anus and sex organs. When an individual desires to speak, this “desire sense” from the brain stimulates the para stage. This Shakti (strength or force) traverses upwards the navel region. This is known as pashyanthi. Further, this desire to speak travels towards heart region called madhyama. This force reaches the throat and exits through the lips amidst tongue, teeth, nose, and jaws. This is known as vaikhari (splendour).

No sooner a thought crosses the mind of an individual and till it is verbally articulated, a chain of activities takes place at various centres of the body. These activities depend on the individual’s stock of words, wisdom and way of expression (speech). This pristine nature is traditionally termed as trikarana shuddhi involving - Kaayaa, Vaachaa and Mansaa (execution, expression and emotion). Thus, noble people have unison in their deed, discourse, and thought-process as expressed in ‘karmanyekam, vachasyekam, manasyekam mahaatmanaam’. This is the reason speech (expression or discourse) is paramount. Thus, the deity for the command over speech is recognized as Vaagdevi or Saraswati -  the Goddess of knowledge, who is revered and worshiped. When we compliment a person’s supremacy over deliverance of speech, his recognition is embodied with all the above narrated nuances.