Article in Kannada and English Rendering by: Mythily Raghavan 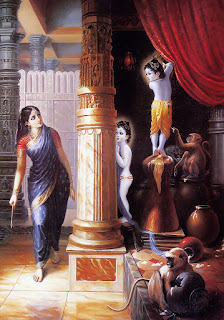 Srimad Bhaagavata Puraana is held in great esteem by all the devotees. Its dashama skanda which depicts Krishnaavataara is the star of attraction among the different skandas of the puraana. The childish pranks of Baalakrishna described therein find a special place in the hearts of everyone. Young kids have a great fascination for this part of the puraana and feel so highly thrilled by the mischiefs of Lord Krishna that they wish to listen to those stories time and again. One among such pranks is the stealing of butter by the Lord from his own house as well as from others’ houses.

Sri Krishna, as everybody knows, was brought up as the son of Nanda, the chieftain of Nandagokula. Obviously, there was no dearth of milk or butter in his palace. Krishna was also the darling of entire Gokula, not to mention about the gopis. So, he could have had his wishful of butter any day, anytime and from anyone. In spite of it, it is said that he sometimes took to stealing butter! The act of stealing is generally considered deplorable by one and all and invariably every parent takes care to instil its ill-effects into the young minds of their children. But the irony here is that the theft by Sri Krishna is adored and admired by all the devotees. Not to stop at that, its glory is sung by none other than the great sage Shuka Maharshi who is well-known for his steadfastness in righteousness! He even proclaims that the recitation or listening of this story of the Lord stealing the butter redeems one from all the sins and enhances the devotion to Him.

How is it justified? What if someone tries to justify on the same lines the stealing of petty things by their children? Deciding the correctness or otherwise of an act: It is common knowledge that an act is considered right if it bestows some benefit. The attitude of stealing, in all probabilities, may lead to dangerous decay of moral values in a child. But the great seers have found that the ‘Butter-theft’ by Lord Krishna had no damaging effects at all! On the contrary it induced serenity in the minds of the people around. A turbid lake cannot reflect things lying at its bottom but when it turns limpid the base is clearly visible. Likewise, a clean and clear mind, free from the pulls and pressures of the senses, shows the Radiance beaming within, like the limpid water. The tranquil mind of the jnaanis is like limpid water and always enjoys the ecstasy of the inner Self.

If such great personages grace a thing merely by their thought then their tranquillity gets transmitted to that object and this is termed as the jnaani’s ‘Manah prasaada.’ If a jnaani casts his glimpse on a certain material it induces equanimity (prasannata) and then that thing acquires the title ‘Prasaada’. If it is graced by his touch its serenity is increased many-folds and if ever the seer partakes of an item and leaves the rest as ‘prasaada’ then such an item has its ‘prasaadatva’ (the potential to induce equanimity in others) enhanced infinitely! This potential and its gradations do not fall within the scope of cognition of a common man. It can only be perceived by the jnaanis. If such is the ability exhibited by those who have visualised the Supreme Light within, how are we to assess and admire the acts of The Supreme Lord Himself?!

Sriranga Mahaguru who had a thorough perception of the secrets behind the incarnations of the Supreme has thus explained the plays of Baalakrishna including his stealing act. No doubt Krishna blessed those who willingly and endearingly offered him butter or milk. But He had a strong intent of blessing even those who, through ignorance, sometimes refused to offer Him. So He took to stealing at their homes, partook a portion of their butter stock and graciously left the remains in their pots as ‘Prasaada’. As already graded, it was a prasaada of the superlative degree! For those who knew this secret it was a benevolent act of blessing; for those who knew not, it was a mere theft. Sri Rangapriya Swamiji, who used to experience the spiritual ecstasy, got deeply immersed in Him on recollecting this ‘benevolent theft’ and has endorsed the proclamation of Shuka Maharshi in Srimad Bhaagavata. The recitation and listening of these tricks of the Lord transmit in us His grace and poise, redeems us from all our sins, enhancing our devotion to Him.