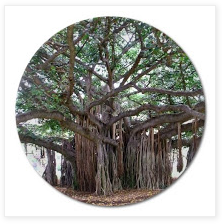 The baby is next fed with honey and ghee (prepared with cow's milk), with a gold spoon along with the traditional chanting of hymns. Honey and ghee are mixed in unequal proportions as equal quantities of both turn this mixture into a poison. Feeding curd, ghee, rice, yave (a variety of wheat), juice from raw banyan fig mixed with jaggery, is also prevalent. The feeding is done with the thumb and the ring-finger. Sriranga Mahaaguru used to say that the thumb represents the Lord and the ring-finger retains its connection with the Sushumna Naadi (the primary energy channel of the human body). Further elaboration is beyond the scope of this short article.

In short, we have seen the procedures, which impart valour, long life, courage to a child, while serving as reminders of its root, Atman. Rituals which show a righteous path to lead a life of Bhoga and Yoga- (wordly as well as spiritual) include a scheme of mantras (hymns), a divine touch (Sparsha) on the important energy centres of the body etc. Smelling the forehead (Agraana) by drawing the breath inwards was covered in previous article.

Next the first breast feed of the baby is from the mother's right breast. Shaastras say that long life and charisma are bestowed with this procedure. To appease the Pitrus (ancestors) charities have to be given. A Jnaani appeases all Devatas while he descends from Samadhi state. This is so, as all the Devatas reside within the seven Dhaatus of the Jnaani's body in their own centres. A Brahma Jnaani enjoys complete Brahmaananda and gives all the Devatas a sip while descending from the Supreme state.

A Poorna Kumbha (auspicious pot filled with water with a coconut on top) is placed beside the baby. This pot, which points upwards, represents the head of a Jnaani. It is a reminder of the state of Jnaana. This enhances the natural instincts in the child required for the vision of Paramatman. It showers Samskara (purification) on all those who grace the occasion.

There is yet another wonderful procedure in our tradition. As soon as the child is born, a triangular-shaped lamp is lit along with a chime (Ghantaa-naada). This is still prevalent in some places. It is mentioned in Garbhopanishad that - "the child views the Effulgent Lord during its 7-8th month of its growth inside the mother's womb and enjoys supreme happiness. It remembers all previous births and takes a vow never to forget Paramaatman (Supreme Lord) after being born. However Karmas (acts of virtue and vice) bind the child and an illusion by name Shatha makes it to forget the vow once again". The lamp kept outside at the time of birth is to remind its vision while inside the womb. Similarly the sound of the bell (Ghantanaada) heard by the yogis is replicated outside. Sriranga Mahaguru had shown practically how a new born baby sees a lamp and smiles ignoring even its parents. Jatakarma, is thus a purifying procedure to eliminate the forgetfulness (of Lord) in the new born baby, as well as those who partake in the ritual.