The Glory of Coconut 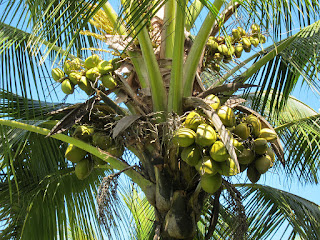 Bhaaratiya culture has many rituals giving importance to numerous materials used in the daily life and specially on occasions like puja (worship), festivals, celebrations and even on non-rejoicing activities. Among the numerous materials used, what very often stands out befitting the occasion is the use of different parts of coconut. ‘Coconut’ becomes the prefix for any part of that tree, for example Coconut water, coconut cream, coconut oil, coconut coir, coconut broom etc.

In our country, Coconut and its various parts, has its unique connotation - as a food ingredient, medicine, charity, offerings in worship etc. Coconut can be all the three: a kernel, a nut, and a seed. The ‘nut’ is so popular; it gets proposed as a co-merchandise while shopping for grocery or materials for worship. The ‘nut’ is not mistaken for other nuts like beetle nut, ground nut, cashew nut, Walnut etc or even other fruits or vegetables.

Every bit of the coconut is used in daily life. As a result, Coconut is called the “Tree of Life” and can produce drink, fiber, food, fuel, utensils, musical instruments, and much more. Thus Coconut tree is referred to and decorated as ‘Kalpa-Vrksha’ (wish-fulfilling divine tree). This raises several eye brows - Why this high pedestal - only for Coconut?

Coconut becomes quintessential material for cooking in Bhaaratiya culinary. It can blend very well with shadrasas (six tastes). It is pleasant and compatible too. This property makes it a universal ingredient. Coconut has medicinal value due to its pleasant and calming properties. It is known to control Vaata and Pitta; in addition, when applied externally, it is effective in skin diseases too. It has benefits in improving brain functions as well as energize our physique. Tender coconut water can refresh while controlling vaata. It is also possible that there could be other materials in nature which could have similar attributes.

Our sages have explored numerous reasons for the greatness of the Coconut. A Kannada proverb says “Taleye tenginakaye Narayana, berale balehannu Narayana”- when this is deciphered, it means, coconut represents the head of the wise people. Head is the center of enlightenment and thus the most significant part of the body. The two halves of coconut are compared to the two lobes (left and right) of the brain. Jnaanis exhibit shikhe (tuft of hair) “jnanamayim shikhaa”. Similarly, the tuft of coconut can be seen mimicking their tuft. The head holds both bhrūmadhya kēndra (the yogic center between the eye-brows) and Sahasrāra chakra("thousand-petalled" or crown chakra) within its fold. The spiritual aspirant could envision the Divine - the ‘Source of All’ between these two spiritual centres. This is achieved through devotion. Similarly, the coconut holds the pleasant cream and milk between the two halves. Jnaanis, unlike the ordinary, have the extra sense like the third eye. This is the divine-knowledge base and opens up on stimulation during deep meditation. Resembling this, a third eye is present in the coconut too.

In a ripened coconut, in place of the third eye, rarely, a small flower like seed can be found. It is the ‘baby’ plant. This is adored on the head with great reverence. Sri Ranga Mahaguru revealed that this seed-like object represents propagation, an incarnation of Divine. The accomplished aspirant can dwell in this centre, realize the Divine presence in the seed-like object and experience ecstasy.

Every part of the coconut tree - shell, leaves, stem, trunk, bunches, fronds - has productive use in making it versatile and wish-fulfilling divine tree. Coconut also stands as a model for the four purusharthas (Objects of Pursuit) - Dharma (Right Discipline), Artha (Right Resource), Kama (Right Desire) and Moksha (Freedom from bondage). It is the birth-right of every individual to achieve these purusharthas.

It is essential to crack the coconut prior to Divine offerings. Similarly, the sahasrara in the head need to be impacted by soaking the mind in meditation and to achieve the enlightenment.

Sages have declared that coconut is a blessed, auspicious, blissful, divine material and an excellent one for charity.

It is Coconut which is an epitome of versatility in nature enumerating not only greatness inside but also outside and every part thereof, creating for itself a place of honour in Bhaaratiya Culture.