Lessons from the Tale of Ganga Descending to Earth 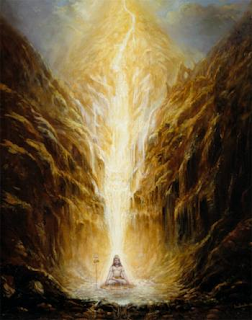 The Emperor Sagara lost his horse of Ashwamedha Yajna. Without the horse the Yajna would be incomplete. So Sagara sent his sixty thousand sons in search of that horse. The princes saw the horse standing in the monastery of the great Kapila Maharshi.  Maharshi was in deep penance and had no knowledge of this. But the noble princes rushed towards him with the wrong premise that the sage Kapila was a robber and without thinking, killed this 'sinner'. Humiliation of such a great Tapasvi and a pious saint and that too for no fault of his, triggered the fire in the bodies of princes, by Nature itself. Then the moment Sage Kapila opened his eyes, they were all burnt to ashes.

Sagara then sent grandson Anshuman to search for his sons as they did not return. Anshuman saw the horse and the heap of ashes piled in front of the Kapila Ashram. He paid great respects to the Maharshi and extoled him. Maharshi narrated the entire incident to him and suggested a way out for the sins of his uncles; that is: Ganges be brought to earth for the goodwill of Anshuman's uncles. With Sage Kapila's permission, he took back the horse to complete the Yajna successfully. Though Anshuman did penance for several years to bring down the holy Ganges, it was not fulfilled during his lifetime. His son Dilipa continued the penance for Ganga, but in vain. Later, his son Bhagiratha resumed the penance intensely and brought the holy Ganga from the sacred feet of Lord Vishnu and then from the head of Lord Shiva. Carrying their sacred energy, Ganga entered the earth as Bhaagirathi to sanctify the ancestors of Bhagiratha as well as Mother Earth.

Sriranga Mahaguru used to clarify that though Gangavatharanam (Ganga descending to Earth) is due to the penance of Bhagiratha, the combined efforts of previous three generations should not be ignored. For example, a huge log requires 20 strikes with an axe to be broken. Every blow loosens the log and breaks down finally with the last strike. Similarly, the added efforts of Anshuman and Dilipa paved the way for Bhagiratha's gangavatharanam along with his own great penance.

This tale teaches us several things: The downfall of the sons of Sagara was due to their ego and arrogance. Nature invariably punishes the offender for the slander of the Mahatma. The compassion of the Mahatma showered on the humble and the cultured men motivated them to do what was seen to be an impossible task. Due to the persistent penance of previous generations, even an insurmountable task could be achieved.

May Kapila, Anshuman, Dilipa, Bhagirathha and the holy Bhaagirathi cleanse our mind and soul and motivate us to undertake noble deeds.