Let us Perform Vinayaka Puja. But why idol-immersion?


Ganesha Chaturthi is just around the corner. Everywhere we can see Ganapa in various shapes and postures. What a plethora of colours and decorations! From tiny to large, what a variety of idols! The effort, the expense and the materials used to make these idols are immense.

It is a well-known fact that we buy the idols and worship them with great pomp and show, while involving the community. After the festivities are over, the idol undergoes immersion either on the same day or in a couple of days. But, what is this? An idol so devotedly worshipped is washed away in water? There are many people who feel the loss of distancing themselves from their darling Ganapa whom they worshipped with such adoration.

There is a saying in Kannada- “A year for the potter but only a second for a stick!” A potter
spends so much time and effort on making the pots while it can be destroyed with a stick in seconds. It is not our practice to immerse the Ganesha idol that we worship daily at home. Then why is it that Ganesha meets this fate only during the festival? Why can’t we retain him at home even after the festival? The answer to these questions is usually that it’s an age-old custom, handed down to us from the wise which we must follow unquestioningly. 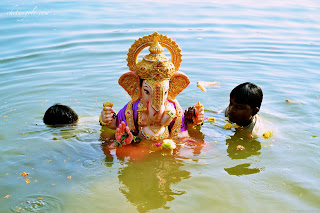 But only the jnaanis who framed this custom can educate us regarding the seemingly strange practice. It is indeed Sriranga Mahaaguru who has perceived and deciphered the intended meaning of this concept of the Rishis and of those who have deeply studied the inherent nuances of our culture. Amongst the many idols of Vinayaka, it is the Siddhi-Vinayaka idol that has to be worshipped during Ganesha Chaturthi. This idol is known to deliver us from all the three forms of pain namely Adibhoutika, Adidaivika and Adhayatmika.

The Mahayogis concentrate and merge their mind in the ‘Muladhaara’ yogic centre where Ganesha resides. After that, they raise the mind to a higher yogic state ‘Swadishttaana’ along with Ganesha; it is here that they obtain freedom from all three types of suffering besides the experience of tranquillity. ‘Muladhaara’ is the station for Pruthvi or the earth while ‘Swadishtaana’ is the station for ‘Ap’ or water. The yogis have brought forth the customs and rituals of

Ganesha Puja as a representative of the higher purpose (of merging the Pruthvi tattva with the Ap tattva) that they experience within them. The representative of Pruthvi is mud while that of ‘Ap’ is water. Hence to indicate the process that has to be undergone within, the external worship of the earthen idol of Ganesha and the later immersion of the same in water has been prescribed by the jnaanis. The custom is intended to draw our attention to the inner experience that one can attain at the Muladhaara and Swadishttaana chakras. The seers are reminding us to introspect into the inner self in this manner.

The external rituals of puja and ‘visarjana’ are illustrative of doing away with existential pains
and paving the path for mukti (liberation). Hence, it is imperative that we look at this festival as that which not only feasts our senses externally but also bestows peace internally. Let us remind ourselves to nurture the higher purpose that we have set out to achieve and carry out the pujas with this resoluteness in mind. It is especially useful to us if we understand the spiritual significance of rituals before we perform them.