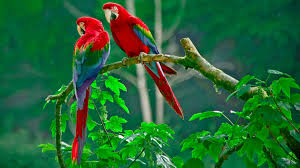 The saying ‘A man is known by the company he keeps” is narrated in the following story. A parrot had two chicks. Once a bird catcher (fowler) caught the two chicks and was on his way back to market to sell them for a price. One chick was fortunate enough to escape from his grip and flying reached a hermitage. The bird catcher sold the other chick to a butcher. Both the chicks were nurtured at their respective places. Once a wayfarer was passing close to the butcher’s house. The parrot at butcher’s place saw him and asked “hey, who are you?” and started using abusive language. The traveller started walking past the house and reached the hermitage. The parrot at that place saluted and welcomed him. It enquired about his welfare in a soft and sweet tone. Though the chicks are from the same mother-parrot, their attitude and language were entirely contrasting.
This story beautifully illustrates how the children cultivate the habits, language, mannerisms etc in the environment they are brought up. Thus cautioned SriRanga Mahaguru that mind of a growing child is like a creeper. The creeper grows in the direction where it is supported. It is sad to note that some mothers lack the ability and capability to guide properly the growing mind of a child. Once upon a time the great Rishis of our country had considered God as centre of their lives and thus built a culture and civilization around it which is unique only to our country. Elders in the society followed the path set by the Rishis. In turn growing children in the society automatically used to inculcate the culture and behaviour by observing elders. Till recent times there were many individuals who were content with what they possessed or got. To illustrate this, I wish to share my experience. One purohit used to come to our home to perform religious programmes. He was a school teacher with meagre income. Upon completion of the rituals when I asked him about the fee to be paid to him, he used to reply – “Give as per your wish. God has given me contentment”. If we have such people around us in society, there are more chances that our children will emulate them. To bring out the best in growing minds of children, it is high time and need of the hour to revamp the entire curricula in our education system. Topics such as lives of great humanitarians, selfless persons and patriots are to be included. It is but natural for parents to expect that their children should stand out amongst the rest of children. Hence children are caught in the whirl of school, tuition, homework etc. To re-introduce Indian culture and magnificent glory of the past, we need to educate people to lead a balanced life in performing worldly activities and at the same time to be in touch with divinity.
Note: The Kannada version of this article can be viewed at AYVM blogs