One Devoid of Vidyaa is Animal-like

The rshis extol the importance of Vidyaa (Spiritual Knowledge) in these words, “Vidyaa is the distinctive feature in man; without it, man is equal to the animals.”  Vidyaa is indeed the decisive difference between man and animals.  Vidyaa is central to a happy and prosperous life worth the living. And the hidden message is: if man aspires to a life loftier than that of the animals, he must pursue Vidyaa.

It is beyond debate that Vidyaa (as education in everyday life) enhances man’s capabilities.  Man can read, write and learn another language. He has probed; discovered nature’s secrets and used them to his advantage. Man’s accomplishment in all fields that can be perceived by our sense organs is mind-boggling.

In contrast, animals seem to live their life in response to the instinctual calls of nature.  By birth, they are well-equipped to deal with stimuli presented by hunger, sleep, fear and procreation. Beyond that, different animals excel at different things. The cheetah is known for its speed and the elephant for its strength.  Even among human pursuits like music or dance, the excellence of the cuckoo or that of the peacock is cited as the standard worthy of our emulation. Some animals show an instinctual grasp of mathematical proportions - consider, for example, the manner in which the bee builds its hive.  Animals are able to navigate themselves to their homes by scent, by a map of the constellations or even by sensing the earth’s magnetism.  Among their social skills, we might marvel at how the soldier ants know their exact contribution to the colony or how the mother bird is a fastidious teacher to her chicks.  Consider traits like gratitude and loyalty where animals set the bar high enough to capture our admiration. Most importantly, barring pets spoiled by human interference, animals bide well by a commitment to keeping themselves in fitness and health!  Given such an impressive list of the abilities of animals, shouldn’t we question whether the earlier statement that animals are devoid of Vidyaa was prompted by shortsightedness?

On the contrary, the rshis who are seers saw far and deep. To understand what their statement means, we must first establish the scope of life.  Life mostly happens in the states of jaagrat - wakefulness; swapna - dream-state; and sushupti - deep sleep.  Whether the intellectual accomplishment of man, or whether the marvel of instinctual animal intelligence, it is all circumscribed within these three states. The joys these accomplishments confer are likewise limited in their scope to these three.  In fact, animals are better-suited to the pursuit of joy in these three conditions owing to the fact that they do not abuse their faculties of the body and mind like man does.

So, when the rshis said, “Without Vidyaa, man is on par with animals,” we need to probe their perspective that led them to issue such a warning.  The answer to this may be found in the proper understanding of the scope of Vidyaa and also in the difference that exists in the make-up of the body of man and animals.

People commonly rely on their sense organs to understand the world or their own bodies.  But rshis gain a deeper understanding by employing the Yoga-drshti (perspective got by the practice of Yoga) secured through penance. Through such a Yoga-drshti, Seers have identified the special features of man’s physiological make-up, the goal of life and the advantages of attaining that particular goal of life.  The highlights of their research are summarized below.

There is a tattva (a principle) of the form of Jyoti or Light in the hearts of all living beings.  This tattva is also identified by the name God. The huge banyan tree grows from a tiny seed containing the blueprint of such a large tree. So also, that principle of Light holds within itself the subtle form of the entire universe and of all living forms. Just like the growth of a seed into a tree finally culminates in the production of another seed, the true fruition of life is achieved when the path back to the Source from where it all started is successfully retraced. It is impossible to imagine the boundless joy arising from the completion of such a journey. 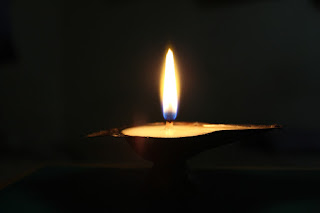 The union with the Tattva that man can achieve through the practice of Yoga is a fourth state called the Turiya.  It is man’s birthright to reach for and grasp this fourth state of Turiya without stopping short at the states of Jaagrat-Swapna and Sushupti.  The natural ability of the human form is to fulfill the promise of Turiya.  Such an ability is not entailed in the physiological or mental makeup of animals.

In the view of the rshis, Vidyaa is not just the acquisition of skills required for a worldly life.  It is not the accumulation of facts either. “Vid” is Jnaana and “yaa” is the means to attaining that Jnaana.  In the Bhagavad Gita, it is clarified that Jnaana is Paramaatman.  So Vidyaa is the means to the realization of Jnaana-in other words, Paramaatman.  Vidyayaa amrutamashnute - through Vidyaa, one can savor immortality.  And Vidyaamayoyam purushah – Purusha (Jeeva) is the embodiment of Vidyaa.

Sriranga Mahaguru explained that man won’t remain like animals only when he becomes Vidyaavanta (‘educated’ in the real sense of the word Vidyaa).  Otherwise man will cheat himself out of an exclusive joy and will lead a wasted life.  The people of Bhaarata should strive to lead such an exalted, educated life by following the tenets of the rshis.