Who is this Glowing One? 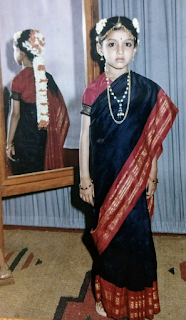 In Bhaaratiya Culture, a very lofty position is given to Nature, the feminine aspect of creation. It is said that when the Almighty decided to expand, he divided Himself into two - one the Resident of the creation (Purusha-the masculine aspect) and the other who expresses and amplifies the Resident – Prakruti the feminine aspect.  The resident –Purusha cannot manifest without the Prakruti.  This manifestation has several stages – the first is called Kanyaa.  Here we dwell upon some of the aspects of   the theme of Kanyaa in our culture.

In Samskritam, the word “Kanyaa” is formed from the root ‘Kani’ meaning bright, lustrous, splendorous, radiant, refulgent etc. The meaning of the complete word depends on the affix (morpheme) added to this root.   For example, if we add “yak - ಯಕ್” we get the word to mean “kumaari” meaning “a young unmarried girl”. When we use the affix “Top- ಟಾಪ್” instead of “gniish – ಙೀಷ”as per Paanini, the word would mean “the Radiant one -kanyaa”.  Kanyaa is also one of the zodiacal signs- Virgo; a medicine etc.  In this article we use the word to mean “The lustrous one – a female who is either married or unmarried”

There is a verse (shloka) in Samskrutam which goes thus: “At dawn, remembrance of the five kanyaas namely Ahalyaa, Draupadi, Seetha, Taara and Mandodari, destroys the most heinous sins”.  What is so special about these five? Why are they our role models and our ideals? Shri SriRanga Mahaguru, the great Yogi and the Chief Resident of “Ashtanga Yoga Vijnana Mandiram”, explains this thus: “Generally the luster of women progressively decreases after marriage but in the case of the above illustrious women, theirs’ increased day by day”.  Their glow lights the path to the soul and hence they need to be remembered at the coolest morning hour, every day.

The importance given by the people of Bhaarat to women becomes clear in the weddings.   While giving away the daughter’s hand to the groom, the bride’s father recites a hymn which goes thus: “I am giving away my daughter, who is the embodiment of goddess Lakshmi, to the groom who personifies Lord SreeDhara”. We see our daughters and wives as goddesses, Lakshmi, Paarvathi or Saraswathi.  “Where women are worshipped, the Gods dance in delight” so goes a saying. That is why the one to be worshiped first in our society is the Mother.  We bow to “Lakshmi–Naarayana, Paarvati–Parameshwara, Saraswathi-Vidhaata (Brahmaa), Arundhati-Vasishta”. Women have such an exalted position in our culture because we are propelled by their serene radiance towards the splendor of the soul.