Temple and the human body

The almighty’s mammoth creation is known as Brahmaanda, while a human body being its miniature model, is called Pindaanda. Just as the entire plan for the expansion of a tree is condensed in a seed, all the tattvas in the Brahmaanda are embedded in the Pindaanda too. Maharshis who experienced the divine power within their gross body, realised that the human body is a divine gadget capable of comprehending the absolute truth in terms of the gross, the subtle and the extremely subtle aspects of creation. This human body is an instrument meant to understand God’s creation and experience the divine light which exists at the root of all this creation. Just as we use a telescope to view distant objects and  microscopes to view tiny objects, to understand the manifest and un-manifest forms of the Brahman in this world, our body serves as a telescope, microscope as well as a vitreous medium to realise the ultimate within. To convey this profound truth to even the ordinary mortal, temples were constructed as a replica of the human body. Thus grew the Temple culture. Thence the saying in Sanskrit  “Deho Devaalayaha Prokto Jeevohamsaha Sanaatanaha” means - “The body is a temple and Jiva (the Self) is the eternal Hamsa (The Swan)”.  The body was seen as a seat of the experience of the divine effulgent light within.

Seeing within us
We look at our face in a mirror and feel elated. In a like manner looking at ourselves doesn’t just mean looking at our outer body, it involves a deeper vision extending beyond the outer frame, constituted by the subtle and the extremely subtle aspects of human creation. This process is called avalokana - ‘seeing within ourselves’. Though possible not everyone is endowed with the required ability to do this. It becomes possible by certain processes of refinement called samskaaras. The institution of temple is one such instrument for bestowing samskaaras. In fact, these methods have been the driving principle behind the agama shastras themselves. In the temples, that are a representation of the body, the atman is the deity and the trigunas- Sattva, Rajas and Tamas are the curtain composed of the three colours white, red and black. In order to set aside the curtain and bring on the joy of the experience of the deity requires an archaka. The even a stone becomes verily the Lord Shankara. The temple is thus a bridge that elevates us from the gross earthly existence to the divine firmament. Shakuntala’s lost ring resulted in Dushyanta’s intimate relationship with Shakuntala turning sour; The same ring served as an impetus for Dushyanta to recall the past nectarine moments with Shakuntala. The temple is akin to that ring, reminding people on earth of their real abodes Vaikuntha and Kailasa. These words of the great Yogi Sriranga Mahaguru must for ever be ruminated upon.


What is within the body instrument?

The yogis’ who peered deep into this human instrument, beheld seven important centres known as Moolaadhaara, Swaadhishthaana, Manipura, Anaahata, Vishuddhi, Aajnya, and Sahasraara. These centres are like seven gateways to experience the divine power within us. Out of these seven, three are very important. Out of these three one is predominant. This structure of our inner self is portrayed in a temple with seven doors or three doors or at times one main door into the sanctum. 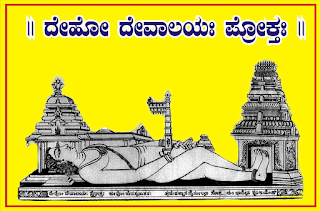 The flag pole (dwaja sthambha) in front of every temple represents our spine. The spiritual up lifting of the soul happening in the sanctum sanctorium is represented by one, three, five and seven Kalashas on top of the shikhara directly above the sanctum sanctorium. Carvings all around, on the walls of the temple depict in succession, the mundane, divine and spiritual truths of our life.  Carvings/sculptures of stories narrating the conflicts arising within us due to baser instincts and the ultimate victory of good are depicted. Depiction of how the 64 kalas and vidyas manifest in the realized may be seen. Temples are endowed with twenty four, thirty six, sixty four, ninety six, hundred and eight, or one thousand eight pillars representing the tattvas of the Lord’s creation.

Comparing the plan of the temple with the human body, the feet stand for the main entrance. The Dwaja sthambha (flag pole at the entrance) represents the Svaadhishthana chakra; the Balipeeta stomach / Manipura chakra; the Navaranga or Nrityamantapa  – heart or Anaahata;  the  Sukanaasi – neck;  the Garbha griha (sanctum sanctorium) – head; the seat of the deity is the middle of the eyebrows (i.e. the place of Aajnya chakra).

Similarly comparing the elevation of the temple with the human body, the feet represent – Nidhi kumbha – part of ritual pot over which the temple is constructed; knee – the Naala (channels); thigh –foundation; waist and the stomach are the walls;  shoulder – Valabhi;  hands - Praakaara (open space round the temple meant for circumambulation);  tongue – the Temple bell; heart- the Devamoorti; neck - Vimana ; head – Shikhara; Brahma randhra (or sahasraara) - the Kalashas.

Extending the vedantic philosophy of pancha kosha or five sheaths surrounding the self or Atman, the outermost is Annamaya i.e. sheath of physical self; the place of circumambulation is Praanamaya – embodied by the Prana shakti; Navaranga paridhi is Manomaya; inner circumambulation path is vijnaanamaya; Garbhagruha (sanctum) is the ultimate innermost Aanandamaya.


A fruit of penance

Thus a temple is a fruit of the penance of Bharata Maharshis. It is at once a model of the four-fold path of Purushaarthas’,  Yagnya-Daana-Tapas; Rita -Satya-Dharma. It achieves worldly and spiritual well-being by means of worshipping the deity – the vibhuti of the parabrahman. Built upon the triad of Dharma-Brahma-Rasa, the temple enables the elevating journey of pilgrimage to a sacred kshetra, a teertha. It has as its purpose the delivering of a jeeva unto Deva. It is a heroic effort to see within this pindaanda that is bound by space and time, the boundless Brahmanda and the Parabrahman.