Why is the Lotus an adjective to God? 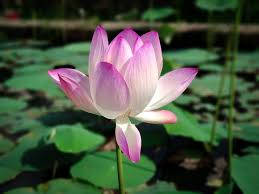 We often hear the words “Kamala Nayana, Aravinda Lochana, Rajeeva Lochana” all similes for the word “lotus eyed”.  Why is God compared to lotus and its synonyms? Are there any mundane or spiritual connotations or pervasive meaning for this, a disciple of SriRanga Mahaguru once asked?  Here we recollect the astonishingly delightful explanation given by him.


Lotus as a simile:


Let us first understand why we use similes.  Let there be two things one known and another unknown but some of the attributes of both are common. Using the attributes of the known we can understand some of the characteristics of the unknown.  This is known as upa-maana or simile or “upamaalankaara” or “the ornamentation using similes”. The object which is to be compared is known is “upameya” and the object used for comparison or understanding is “upamaana” – the one which measures. The attributes common between them is called “Saadharana Dharma” or “common attributes”.  For example, Lord Raama is usually called “The lotus Eyed” meaning He and his eyes steal our hearts just as Lotus does.


The essence of Shri SriRanga Mahaguru’ s Saying In the phrase “Aapo Naara iti prokta” – the meaning of Naara is water.  Naaraayana means the one whose bed is water. It also means the one who is the ultimate refuge for everything.  Since the lotus is born in water, it is called “Jalaja, Neeraja, or Ambuja” all meaning “The water born”. The lotus takes birth and grows in water and hence it is a companion - sahachari to Lord Naaraayana and hence the use of the flower lotus as an adjective or simile to the lord is appropriate.

The lotus at the root of all creation:

Lord Brahma, the godhead responsible for creation takes birth in the lotus navel of the lord, he is “Lotus Born”.  Hence lotus is at the root of creation. The name of goddess Lakshmi is also Padmaa, Kamalaa meaning Lotus.  There is a hymn on Goddess Lakshmi which goes thus:

“Oh the one who loves lotuses, who is seated gracefully on a lotus, whose exquisite hands hold the lotus with a delicate poise, whose lotus heart is the abode of the Lord, lotus- petalled eyed, the one who loves one and all in the universe without discrimination, the one whose action is in consonance with the intent of Lord Vishnu, may you always grace me the close proximity of your lotus feet”.  The lotus is used to describe her seat, her abode, her hands and feet.  If the consort is likened to the lotus should not her lord be in consonance?  That is why Naarayana is also described as one with hands like lotus, lotus footed, lotus eyed and so on. What a beautiful description!

It is believed that the inner power centers like Moolaadhaara along the spinal cord are seen by yogis with their inner eyes as petals of lotuses.  “He enjoys with Lord Shiva (Vishnu) in the thousand-petalled great lotus- Sahasraara” so goes a saying by the great sages of Bhaarat.  Lotus has an important place in the physical universe too. Lotus is delicately petalled, pleasingly colored, with a heavenly fragrance stealing the hearts of one and all.  Ayurveda hails its medicinal properties. It is said that Gods love this flower greatly and hence when we worship, one of the most important flowers to be used is lotus. The lotus, thus, has a unique place from the beginning of time to eternity. The Government of India, appropriately, has also declared this as our national flower.

Note: The Sanskrit version of this article can be viewed at AYVM blogs